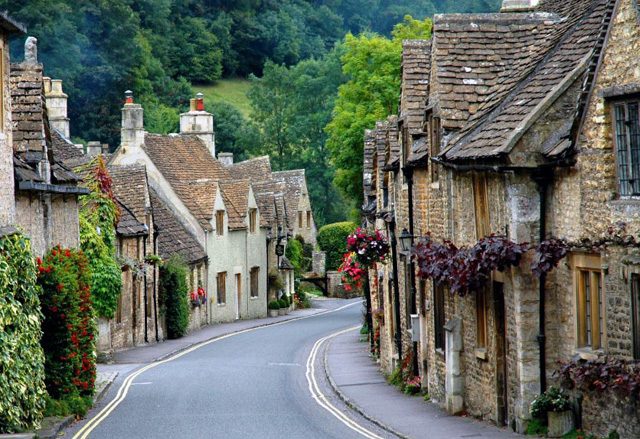 This picture is of the famously lovely village of Castle Combe nearby.

Whilst the delights of Bath are close at hand, the village of Colerne itself offers many local amenities including a hairdressers, newsagent, florist, grocery store and two traditional village pubs providing great food and drink with the occasional music event , all reached within a five to ten minute walk from the house. There are also two clubs that often have live music or discos at the weekend. A short drive away, the picturesque villages of Castle Combe and Lacock and the local towns of Bradford-On-Avon and Corsham can be of great interest and provide many and varied dining opportunities.

Lacock is a village bequeathed to the National Trust and used for scenes in Cranford and the Harry Potter movies as well as being the site of Lacock Abbey and Museum where Henry Fox Talbot did pioneering work on photography.

Castle Combe has been described as the “the prettiest village in England” by many and was used in the film Warhorse. Locally many film and TV locations can be found. (See local activities for a list).

For the summer we have a barbecue,  ice maker and a large drinks chiller. We also have a games table, trampoline and fish pond which can be of interest to children. There is also a children’s play area in the village. (See local activities above for children’s interests). We have large rooms, gardens and an off street parking area all away from main roads.

Our guests can use the Bath Rewards Card which entitles them to a range of discounts within Bath including the Therma Spa and Roman Baths. See http://www.stayinbath.org/reward-card/
Sue Parkinson,
Trimnells House,
Trimnells, Colerne,
Chippenham SN14 8EP,
United Kingdom

Secure payment for bookings can be made by debit/credit cards through our reservation website (via the 'Availability & Booking' menu link on the menu above). Otherwise full settlement of the bill should be paid at Trimnells House by credit card (via our cardreader), cash (GBP, EUR, USD, AUD, or NZD) or by cheque with guarantee card.

Please do not arrive without a reservation.